Since the release of the Australian Government’s 2016 Defence White Paper, the Australian defence sector has undergone a period of significant growth, change, and increase in complexity. This is something you’ll hear us talking about a lot, not just at Kinexus, but across the industry as a whole. It’s easy to say “the defence sector is changing,” but how can we quantify what we know anecdotally as data?

Kinexus’ answer to that question is our defence sector job index, the first ever index of its kind in Australia. The Kinexus job index is a collation of job vacancies as advertised by Australian defence companies, providing a snapshot of employer workforce demand over time. By looking at historical advertising trends, the data gives workforce planners a greater understanding of market trends and changes; an invaluable insight when making informed hiring decisions, and planning for the future.

For the latest data from Kinexus’ defence sector job vacancy index, read on.

When it comes to job type, the tables have turned on demand.

Advertising for temporary and contract workers has dropped off significantly over the last 12 months. This follows a period of growth in the need for temporary staff, likely due to uncertainty around workforce planning prior to the major defence projects being awarded.

Now, the landscape is more established, and almost all major projects have been assigned to primes delivery. Prime contractors especially are therefore looking to hire a greater number of permanent staff.

This is unsurprising, given the current expansion of the Australian defence industry, and in line with historic trends. Importantly, the overall number of jobs on offer within the defence sector has increased significantly.

Figure 1 represents changes since December 2015 in number of Defence Industry jobs advertised by job type; permanent, temporary and contract, and all jobs nationally.

Following impressive growth spurts in both WA and the ACT since 2015, advertising for roles has seen a dramatic drop-off within the last two years.

Strong increases were noted in NSW, SA and  Victoria. and reflect the recent award of large procurement and sustainment contracts.

In Queensland, advertising levels have remained largely unchanged since 2015. A small increase was noted in 2018, but hiring activity has returned to normal over the last 12 months 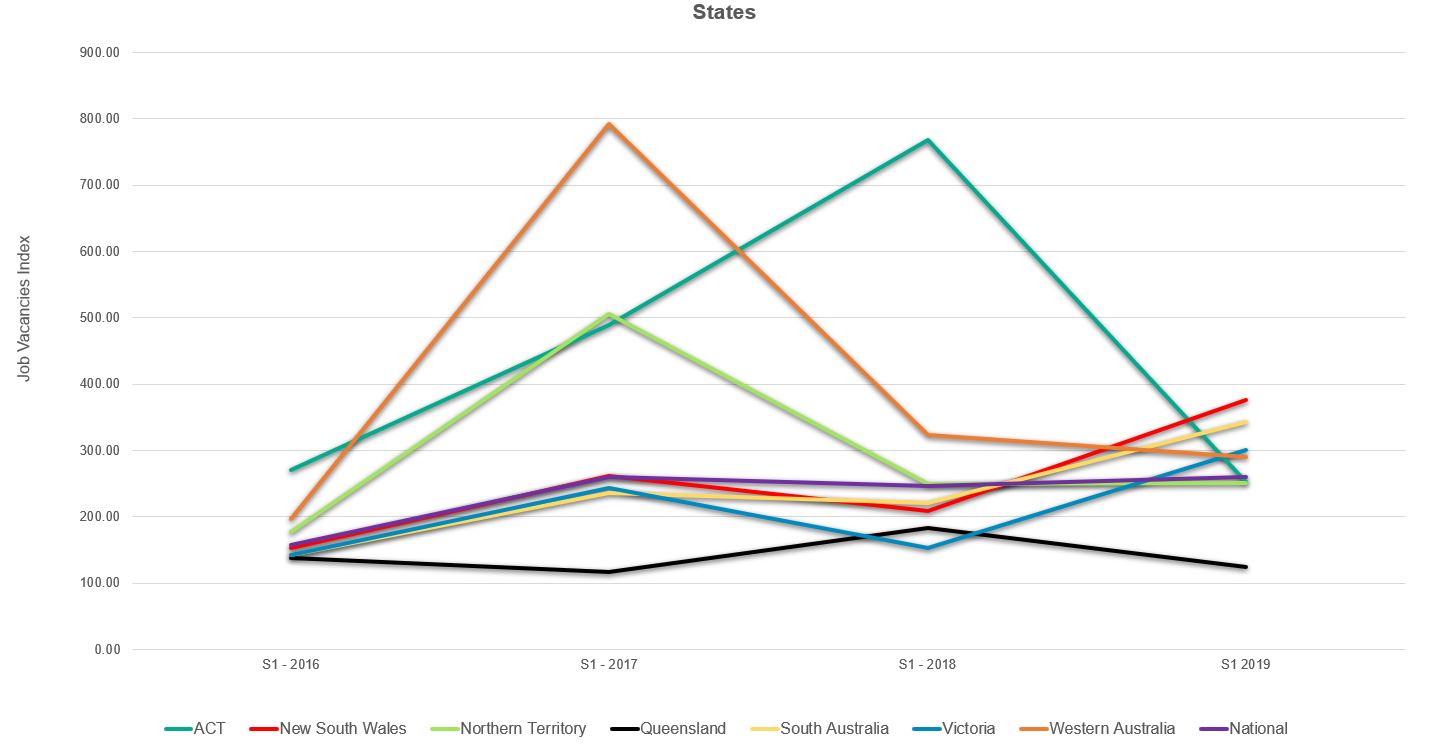 For more information on what’s going on in the industry, visit kinexus.com.au and subscribe to our blog or call us on 02 9492 7500 to speak to a specialist Defence Industry consultant.

The data for the Index is subjected to a rigorous deduplication process both within sites and across different sources. The data is expressed as an index by reference to a baseline of 100% that was set for the period of S2 - 2015 (Semester 2, 2015).